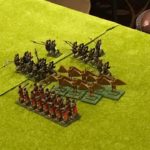 Welcome to The Hall of Blue Illumination, the podcast dedicated to the world of M.A.R. Barker’s Tékumel.  In this episode, our hosts discuss Gary Con, answer a listener’s question regarding the use of Tékumel’s languages at Professor Barker’s gaming table, and talk with James about the latest issue of The Excellent Travelling Volume.  We finish out the episode with the Five Hlimékluyal (Cohorts) of the Gods of Change.

[00:00:49]  At the time of recording, Victor is at Gary Con in Lake Geneva, WI.  He’s running a Legion of the Petal Throne game using the Professor’s own miniatures, pitting a Tsolyáni army against a force from Yán Kór.

[00:04:47] For Tinalíya and Pygmy Folk, the ratio is 1:200.  In Legions of the Petal Throne, the Pygmy Folk can come into play because they can serve in the armies of Yán Kór.  Even though they’re small, the Pygmy Folk are fierce warriors.

[00:05:53]  Details about Gary Con.  Run by Luke Gygax, it’s dedicated to Gary’s memory.  Many TSR alums participate, and the convention is small enough that you can actually game with them.

[00:07:02]  Dave Wesley is running his Braunstein game, and Dave Megarry (designer of Dungeon!) is also there.

[00:07:26]  The vendors at Gary Con are awesome.  Victor gives an overview of the dealer’s room, and notes the OSR publishers, many of whom are represented by Jon Hershberger and Allan Grohe of Black Blade Publishing.  DARLENE, an artist who worked for TSR, is also there.

[00:08:02]  Jeff Dee (co-designer of Béthorm) is at Gary Con, mostly to launch the third edition of Villains and Vigilantes.

[00:08:31]  Other Tékumel folks present. Mark Siefert is running several Empire of the Petal Throne sessions at Gary Con.  Victor apologizes if he forgets anyone!

[00:09:52]  An email from listener Joe H.  Did players at Professor Barker’s table use the Tékumelyani languages? If so, how often and with what degree of fluency?  Victor answers, Tsolyáni and the other languages were not spoken a great deal, even though several players (including Victor and Curtis Scott) worked on them.

[00:11:15]  Many Tsolyáni terms did enter common usage in the Professor’s games.  These are terms that would be used frequently, or used in their English equivalents.  For example, instead of “week” players at the Professor’s table would often use “six-day.”  Another common term was kirén, a measure of time equaling about half an hour.

[00:12:41]  Tsolyáni terms would be used in English sentences, although players would often pick up some of the cadence of Tsolyáni and apply that to their English speech.

[00:13:05]  Scott asks, has Victor ever heard a Tékumel-themed filk?  A plucky listener could perhaps make a single hlásh in the streets of the foreigner’s quarter if they did so.

[00:14:51]  Our hosts reference Professor Barker’s recordings of the rituals that accompanied some editions of the Tsolyáni Language.  The Tékumel Foundation is working to make these available again.

[00:16:00]  James did not have to write all of this issue.  He received submissions from a Tékumel fan in Finland and one from veteran game designer Jeff Grubb.  Another fan sent in a new character class based on unarmed combat.  Also included are an article on playing Páchi Léi and Pé Chói characters, one about magical weapons, and some additional material on the Shunned Ones.

[00:18:58]  James is really looking forward to Issue No. 8, which is due out soon.  It’s meant to provide a basis for starting a EPT campaign in Sokátis, and will include pre-generated characters, maps, descriptions of the foreigner’s quarter, patrons and NPCs, as well as side adventures.  Now no one will be able to complain that they don’t have the material to run EPT.

[00:22:26]  Back to the cover and it’s “pulpiness.”  It illustrates how different individuals can interpret the world of Tékumel in different ways.  Everyone is going to approach the material differently and we’d like to see more of that.

[00:23:20]  James tried not to edit submissions for The Excellent Travelling Volume so that they would be their creators’ work and not his own interpretation of it.

[00:24:17]  Having another example of how to set up a campaign helps to give prospective referees contrast and perspective on how develop their own games.

{00:24:47]  Tékumel is a world that is much easier to comprehend and enjoy if you actually game in it.  In particular, the ideal way is to set up a long-term campaign.

[00:25:55]  Wurú, cohort of Hry’y.  It’s unbelievable, but some people don’t understand how important it is to defend the principle of supreme chaos.  Then again, Victor may be biased.

[00:27:00]  Professor Barker was clear that both Hry’y and Wurú didn’t have many worshipers.  What’s the appeal of true chaos in the universe?  The Yán Koryáni don’t even have analogues for these deities.

[00:28:18]  Not only is Wurú a defender of chaos, but also of the concept of unknowing.  Interestingly enough, Hry’y and Wurú are also the gods of gambling and moneylending.

[00:29:35]  Chiténg, cohort of Vimúhla.  The Company of the Edification of the Soul, a corps of executioners, are among the worshipers of this god.  Our hosts note Trínesh’s encounter with them in Flamesong (See Flamesong, beginning with chapter 20).

[00:31:24]  Grugánu, cohort of Ksárul.  All of the player characters in James’s Sokátis campaign worship one or the other of the Gods of Change, but specifically only one of them worships a cohort.  Grugánu doesn’t get much love, in part because Ksárul is such a compelling figure.  This cohort represents the expression of some of the more active elements of the Doomed Prince’s doctrines.

[00:34:22]  All of the terminology for the gods is descended from Engsvanyáli theology.  The Priest-Kings were all very much followers of the gods of Stability.  Victor makes the case that the Engsvanyáli play a “Victorian” role with respect to contemporary Tsolyáni culture.

[00:37:07]  James points out that the Tsolyáni have deliberately appropriated the heritage of Éngsvan hlá Gánga, but many times the Engsvanyáli distinctions are obvious simplifications of a more complicated reality.

[00:38:27]  However, James also points out that Pavár’s pantheon makes coherent sense, even those aspects that appear peculiar from our perspective.  All of these deities and their faiths are deeply integrated into Tsolyáni culture; they all have their place.

[00:40:08] Victor has difficultly with deities as they’re presented in Dungeons & Dragons because they’re often described in a mechanical fashion, such that they’re almost cartoonish.  There’s no discussion of ritual or doctrine or the history behind the practices of their faith.

[00:42:57]  Are the “Five Worlds” in Hriháyal’s description the five planets of Tékumel’s star system?  Victor doesn’t know, but refers to Bob Alberti’s article in Mitlanyál.

Legions of the Petal Throne was first published by TSR in 1977.  It is out-of-print.  You can find more information about it here.

Qadardalikoi: Miniature Campaigns on the World of Tékumel is also out of print.  It was published in 1983 by Tékumel Games, and is a companion of sorts to Swords & Glory.

The Armies of Tékumel books were published in six volumes by several companies over a twenty year span beginning in 1978.  All are now out-of-print, and some are harder to acquire secondhand than others.  In addition to miniature painting guides for the respective armies, these volumes detail military units, their equipment and commanders.

The Tsolyáni Language is available for purchase as a PDF at RPGNow, however, this release does not include the audio recording referenced in this episode.   Some editions of the Tsolyáni Language were accompanied by an audio Pronunciation Guide that included recordings of Tsolyáni music, rituals and The Lament to the Wheel of Black.  The first two tracks of this CD are restored from an original cassette recording.

The Excellent Travelling Volume is James Maliszewski’s fanzine dedicated to M.A.R. Barker’s world of Tékumel.  Its most recent issue, No. 7, was released on March 26, 2017.

Flamesong, Professor Barker’s second novel, remains out-of-print, but is easily acquired through online used booksellers.  The Tékumel Foundation plans to reissue it in print and electronic versions in the near future.

Mitlanyál is an in-depth exploration of the religious practices of the Tsolyáni in two volumes.  It was published in 2004 by Zottola Publishing and is currently out-of-print.

Non-Tékumel Products and Other Things:

The original Chainmail rules were published by Gary Gygax and Jeff Perren in 1971.  They are available as a PDF from RPGNow.

Braunstein is a miniatures game pioneered by Dave Wesley.  It has never been published, but influenced the development of Dungeons & Dragons.  This forum thread provides some interesting historical tidbits.

Dungeon! was first released by TSR in 1975, and has seen several rereleases.  It is a board game that shares many qualities with Dungeons & Dragons.  Wizards of the Coast published the most recent edition in 2014, and it remains in print.  The official rulebook for this edition is available here.

Among other things, Black Blade Publishing has published Swords & Wizardry and OSRIC, both “old school revival” rules sets based on the 1974 edition of Dungeons & Dragons.

Darlene (usually styled with a large “D” capital, followed by small capitals; born Darlene Pekul) is an artist whose work will be recognizable to anyone familiar with TSR publications of the late ‘70s and early ‘80s.

Villains and Vigilantes is a superhero-themed roleplaying game created by Jeff Dee and Jack Herman and first published in 1979.  Last year, their company Monkey House Games successfully kickstarted a third edition of the game, which is marketed under the name Mighty Protectors.  It is currently in prerelease, and should see a general release soon.  Meanwhile, you can purchase many of the rules and supplements for the two previous editions in electronic PDF format on RPGNow, or as print-on-demand products from Lulu.

Stefan Poag provided the cover art for the Excellent Travelling Volume No. 7.