Hall of Blue Illumination
Episode 17, "No NPCs on Tékumel" 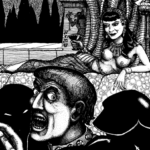 Welcome to The Hall of Blue Illumination, the podcast dedicated to the world of M.A.R. Barker’s Tékumel.  In this episode, our hosts discuss Prof. Barker’s now-infamous declaration, “There are no NPCs on Tékumel.”  Essentially, what the Professor meant is that the players’ characters aren’t particularly special as far as the greater world of Tékumel is concerned.  Our hosts examine ways to follow this approach in your own games.

[00:01:02] Prof. Barker was particularly straightforward about this.  Why should players in a fantasy game with no other frame-of-reference treat NPCs as “less real” than the PCs.

[00:01:59] We’ve discussed this before: Tékumel presumes that the players aren’t the most important people on the world.  They’re just a handful of millions of people going on about their lives in Tékumel.  The world is much bigger than they are.

[00:04:00] How do you say “scuzzbucket” in Tsolyáni?  [GPD: If this humble scribe could be so presumptuous as to make a suggestion, Múbakh hiWaskhékh.]

[00:05:06] When the Professor writes about various NPCs and other personages of Tékumel, you can see that these are “people the professor knows,” in that he attributes to them the same sense of personal complexity that you would to a real person.

[00:05:57] This should be encouraged.  The “more real” the referee presents an NPC, the more real players’ interaction with that NPC will be.

[00:07:00] Consider your NPC’s place in the wider world.  Who are they?  A little bit of effort goes a long way.  James relates his experiences with gaming groups where players have become attached to a minor NPC and ended up taking the campaign in a new and more interesting direction.

[00:09:40] Having a prepared list of Tekumeláni names so that you can name NPCs on the fly is a great way to add depth in the moment.  Victor relates that he’s encountered referees who have given names to NPCs that are in fact the throne names of emperors and empresses.

[00:12:11]  Keeping track of referee characters.  Our hosts discuss how they keep track of PCs and NPCs.  Professor Barker kept characters on index cards, which were color-coded by the god the character worshiped.

[00:18:56] A fun anecdote from James regarding his own NPC index card archive.

[00:19:44} Regardless of what form it takes, it’s useful to have both an analog and a digital archive of these materials.

[00:21:16] What about session notes?  Victor hasn’t been doing it, but he thinks that everyone would benefit from doing more of it.  It helps you recap between sessions, especially after a break.

[00:24:31] James gives us an anecdote about an exchange he had with Prof. Barker regarding the combat system.  The Professor felt that no player should ever feel safe in combat, that anyone could make a lucky blow.

[00:28:10] Players sometimes get unduly attached to their characters.

[00:30:03] Another fascinating anecdote from Victor, this one involving Princess Ma’ín.  She was a significant personage in Tsolyánu, but she failed a saving throw against an Eye of Transformation.  Professor Barker was not happy about this in the beginning, but he allowed it to happen, and the result has persisted in Tékumel ever since.

[00:34:18] Like many of us, after reading the descriptions of the princes in EPT, James made his own conclusions about which prince would end up on the Petal Throne. But events took another course.

[00:38:00] In the Professor’s games, regardless of an NPCs situation or status, they always had something of interest about them.  He eschewed any description that discounted an NPC’s uniqueness.

[00:39:03] NPCs who turn into PCs? This has happened in James’s campaigns, often when one of the original PCs dies in the middle of a session.

[00:40:07] James likes this arrangement because players will end up with NPCs who aren’t what they would have created if he had given them the option.