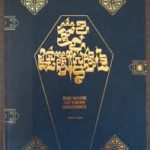 Welcome to The Hall of Blue Illumination, the podcast dedicated to the world of M.A.R. Barker’s Tékumel.

Double-check your diagrammes and sharpen your sacrificial daggers, because in this episode our hosts discuss The Book of Ebon Bindings.  This legendary, out-of-print work is a fascinating and unique piece of Tékumel.  Our hosts describe The Book, discuss its content, and offer some theories on the motivations behind its creation.

[00:01:25] The Book of Ebon Bindings is currently out-of-print. The Foundation wants to re-release it in the future.

[00:02:27]  Professor Barker did the layout for the first and second editions on his own typewriter.

[00:03:00]  Victor briefly leaves to attempt to sort this matter of publication dates.  He returns with a copyright date of 1978.

[00:04:09]  Warning!  Discretion advised.  Children are especially susceptible to the demonic influences to be found inside.

[00:04:58]  James relates a rumored origin of The Book of Ebon Bindings: that it was an attempt by Professor Barker “to tweak sensibilities”, and comment on concerns regarding the subject-matter of fantasy gaming.

[00:05:49]  While Victor can’t speak to the Professor’s motivations with respect to The Book of Ebon Bindings, he can say that at the time, the Professor and his players had nothing but contempt for concerns about gaming’s effect on children.  Most of the gamers back then had the attitude that the world was a dangerous place, and to pretend that gaming was unusually problematic was silly.

[00:09:25]  The Book was released three years into the publishing history of Tékumel and several years before Swords & Glory Vol. 1, yet remains one of the longest pieces of Tékumel source material.  So why The Book of Ebon Bindings?  The Professor discusses this in Dragon #11.

[00:11:05]  Even original EPT had demons.  The Professor is trying to outline cosmic relationships, using these big monsters. Kurritlakál appears in EPT’s Example of Play (§2810, p. 102).  Even there, it’s clear that the intent is that demons should be special and different from the other monsters on Tékumel (which are all, on the whole, much more dangerous than those of Dungeons & Dragons).

[00:12:58]  Professor Barker got many more questions than he answered in the “Seal of the Imperium” columns.  In Dragon #11 (question #4), the Professor responds to a question about demons, and his answer is both thorough and fascinating.

[00:18:27]  Were Trasüné hiTánkolei and Kalusü hi Viridáme PCs?  Victor encountered Kalusü (a high-ranked priestess within the Temple of Ksárul) as an NPC, but these two individuals may have been PCs in the late 1970s.

[00:21:26]  “…on a literal level.”  It’s worth noting that these are English translations of the Tsolyáni and Engsvanyáli recensions of the Llyáni original, which is no longer extant.  (GPD: Also consider the deliberate excisions referenced in the preface, p. vi)

[00:21:55]  The Book of Ebon Bindings is both a game supplement and also meant to be a representation of a thing existing in the world of Tékumel.  This makes it unique as a work.

[00:22:20] Like other fictional grimoires, it was in part inspired by the seventeenth century work The Lesser Key of Solomon.  The Key is a catalog of demonic entities for alchemists and scholars.  Scott notes that the sigils and introductions of the various demons in the Key are similar to those found in The Book of Ebon Bindings.

[00:23:50]  For gamers and sci-fi and fantasy fans of the era, the Key and historical works like it were all grist for the mill.  Professor Barker would have been familiar with it.

[00:25:00]  The anecdotes of The Book of Ebon Bindings can be very entertaining.  Offhand references and little hints regarding aspects of Tékumel are part of its appeal.

[00:26:15]  James has used The Book for its references to locations, people and places of Tékumel’s forgotten past, information whose context would be lost even to modern Tsolyáni.

[00:28:40]  If there’s anything you should get out of The Book of Ebon Bindings, it’s that the world is far stranger than you can even imagine.

[00:29:22]  For instance, is the Salarvyáni deity Shiringgáyi an amalgam of Avánthe and Dlamélish, or is she something else?  The answer the Professor suggests is you’ll never be able to understand the answer to that question.

[00:30:02]  You’re not always going to find canonical answers to your questions.  A lot of gamers dislike games where they can’t get these answers.  Of course, the referee can decide these matters, but even this might not satisfy some players.

[00:32:40]  An excerpt from the entry on Origób (BEB, p. 23) illustrates the Professor’s mastery of language and description.  The Book isn’t an atlas like Swords & Glory Vol. 1, it’s a much more entertaining document.

[00:34:05]  Victor sees similarities between this language and the work of Clark Ashton Smith.  All three of our hosts agree that Smith’s works exerted a much greater influence on the Professor than those of Lovecraft.  Phil thought of Lovecraft as a bit of a one-note bore.  Jack Vance also stands out as an influence.

[00:43:20]  The art in The Book of Ebon Bindings is a mixture of Professor Barker’s own work, and that of one of his players at the time, Craig Smith.

[00:44:05]  Shortly after producing The Book of Ebon Bindings, Imperium Publishing ceased operations, largely due to a disagreement between some of the people involved at the time.  This, in part, was related to a dispute between Professor Barker and TSR over royalties.

[00:45:50]  A description of the art for the demon Marággu (BEB, p. 40).  Is this type of illustration an indication that The Book wasn’t meant for a broad audience?  Victor indicates that it is instead evidence of the “we’re all adults here” attitude among gamers at the time.  This is not all that different from things that would show up in The Arduin Grimoire.

[00:48:41]  At the time Scott discovered The Book, D&D was going “the kiddie route” by producing a cartoon and attempting to appeal to younger audiences.

[00:49:07]  James is slightly disappointed by the art, because it’s clearly twentieth century art.  He would have preferred to see something that better approximates the illustrations the Tsolyáni would produce.

The Lesser Key of Solomon is a seventeenth century grimoire covering demons.  You can read a translation, and view the accompanying illustrations free-of-charge here.

Gods, Demi-Gods and Heroes was released by TSR in 1976 for Dungeons & Dragons.  It is the first sourcebook to detail various mythological and fictional pantheons for D&D, and to provide statistics for these deities.

The first edition of Deities and Demigods was first published by TSR in 1980.  It saw several re-printings, and was later repurposed into the first Legends & Lore.  Like Gods, Demi-Gods and Heroes it provides game information on a variety of mythological and fictional gods for the D&D setting.

Arduin is a roleplaying game and setting written by David A. Hargrave, and originally self-published in 1977.  Several subsequent publishers have released products for Arduin, most notably Grimoire Games.  Early on, Arduin incorporated material from genres beyond traditional medieval fantasy.  Anthony Pryor has a lengthy overview here, but beware the NSFW image halfway down.