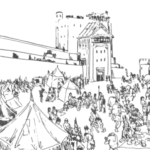 Welcome to The Hall of Blue Illumination, the podcast dedicated to the world of M.A.R. Barker’s Tékumel.  In this episode, our hosts discuss the role of social status in Tékumel.  Unlike other roleplaying settings, Tékumel places a heavy emphasis on a character’s position within the social hierarchy, and the rights, privileges, limitations, and obligations relating thereto.  We touch on how this emphasis effects adventuring on Tékumel, how players’ characters can find opportunities for advancement, and give examples of notable personages who rose to (and fell from) the highest rungs of Tèkumeláni society.

[00:00:56]  Among Tékumel’s defining characteristics is an emphasis on characters’ position within the social hierarchy.

[00:01:23]  Victor’s Wednesday night group has already dealt with questions of social status.  His players quickly began to ask how they advanced their characters in Tsolyáni society.

[00:02:09]  As most of Victor’s players were playing either priests or lay priests, becoming attached to a temple was a convenient option.

[00:02:24]  His players also began to grapple with the question of clan affiliation.

[00:02:40]  The “Anthropological View” of Tékumel:  Victor believes that one of the reasons players want to play characters who start off with some measure of social status is so that they will know their characters’ place in society.

[00:03:08]  This is neat, but part of Tékumel as Prof. Barker conceived it is the opportunity to become a hero.  Becoming a hero in Tékumel isn’t just a matter of individual might and deeds, but one’s context – who do they represent and for whom do they stand.

[00:03:48]  “Tékumel definitely does not reward, encourage, or facilitate murder-hoboism.”

[00:04:25]  Tsolyáni society has many of recognizable avenues for advancement.  Players generally stick to these.

[00:05:14]  Success is the ultimate seal on your actions, even when you take unorthodox actions.

[00:05:31]  Prince Esélne’s “new men” were nobodies from faraway lands, many of them with dubious histories.  But they did the right thing at the right time for the right people, and are ultimately showered with glory and treasure.

[00:06:39]  Many times, it’s a matter of having official blessing.  You can get away with a lot more with a powerful patron.

[00:07:20]  What are the avenues of advancement?  The first is the literary route, e.g., the one taken by Harsán in Man of Gold.  He has knowledge, he can do things others can’t, and as a foundling, he’s also of no consequence at the outset.  If he fails, he’s expendable, just like “fresh off the boat” player characters.

[00:09:07]  Prof. Barker:  “There is a fine balance between making the game too easy and too hard: if one is permitted to rise too quickly, the court intrigues and Imperial bureaucracy can be deadly, and if it is made too difficult then one’s players all die too easily and become discouraged.”  (The Dragon #11, “Seal of the Imperium”, p. 12)

[00:10:15]  One of the objects of the game at the beginning is to find patrons, or someone for whom you can perform a task, who will support the player characters to achieve a goal of their own.

[00:10:50]  Examples of foreigners or clan-less individuals gaining high social ranking?  Chúlin of the Grass People came from the southern continents and formed a legion after having success under the patronage of Prince Esélne.

[00:12:51]  As with many aspects of Tékumel, its important to recognize the distinction between “game” and “real” Tékumel.  (HoBI Ep. 13)  Social status in “real” Tékumel is much more static.

[00:14:00]  Another example of a foreigner who “made good” within the Five Empires: Baron Áld, who went from nothing to something, twice.  Baron Áld was born in Sa’á Allaqí, became a Tsolyáni mercenary, and rose to be a major player in Tsolyáni politics.   Of course, he fell from grace, left Tsolyánu and went to Yán Kór, where he again rose to great heights.

[00:16:06]  Almost anyone who is a potential patron already has a network of people working for them.

[00:18:20]  Most of the time, the patron himself isn’t going to show up.  The patron is going to send one of their retainers, or tasked with a mission by his patron, the retainer is going to seek out the player characters for himself.

[00:18:55]  When characters reach a certain level of social standing or responsibility, their activities change.  They may have to govern a fief or run a temple rather than running off to the underworld.

[00:19:33]  In James’s longest running group, many of his players are in positions of authority.  These characters have changed, and in fact some of them aren’t played as often because they’re otherwise occupied in-game.  But on the other hand, the player character governor is still roaming about, under the pretense of a mission of diplomacy.

[00:22:17]  Of course, this doesn’t mean that there aren’t consequences for their actions.  The governor who wanders into the jungle is going to suffer political and social consequences as events at home continue to develop.  Like all good referees, James provides just enough rope for the players to hang themselves.

[00:23:34]  Another example from Prof. Barker’s games — in the list of notable personages of the Temple of Ksárul is Lord Keléno.  He’s the new Administrative High Priest at Mrelú, but is also of foreign extraction.  This was originally a player character.  (Tekumel Journal #2, “Ksárul, ‘Doomed Prince of the Blue Room’”, p. 20)

[00:25:28]  What about characters who begin play at high social status?  For a while when Victor was playing in the Professor’s games, this happened.  He discovered that while high social status is a passport, the characters were always conscious of their reputation and social obligation.  Prof. Barker used these tensions to make the game interesting.

[00:28:35]  If you had players who weren’t that familiar with Tékumel, playing characters who were “fresh off the boat”, you could create a scenario where they were caught up and immediately elevated to a high status, and have to navigate the perils of that.

[00:29:28]  Like a lot of things in Tékumel, there’s a lot to be said for having to struggle through it and not being able to understand precisely what’s going on.

[00:29:49]  The guys discuss an episode from Prof. Barker’s second novel, Flamesong, where the protagonists have to navigate an awkward social situation in a foreign environment.

[00:31:58]  One of the fascinating things about the novels is that they involve Tsolyáni characters out of their element in a foreign land.

[00:33:19]  “Use the right fork.”  If he didn’t know better, a Tsolyáni gentlemen of any importance would have a special etiquette slave to inform him of such matters.

[00:35:16]  Sometimes the available adventure opportunities depend on what players want out of the game.  One scenario Prof. Barker didn’t find interesting, but that some of his players did, was to play members of a tomb robbing clan clan of professional mourners.

[00:37:46]  You could run many sessions where players have to curry the favor of individuals who aren’t much higher up in the social hierarchy.  There are an infinite number of degrees of social strata.

[00:40:15]  A referee who wants to run a “fresh off the boat” campaign is going to want to generate a number of nonplayer characters who can act as potential facilitators or patrons.  You can envision a scenario where players are passed from one patron to another as they rise through Tsolyáni society.

[00:42:00]  Another scenario are players who belong to clans of middling status.  Like “fresh off the boat” characters, perhaps they rise as far as the people in power are willing to promote them?  Victor suggests that clans aren’t evenly distributed across the Empire.  A player may begin as a clan-member in a distant, rural area, and rise to a prominent position as a clan leader in a large city.

[00:44:30]  It’s not common, but sometimes marriages between clans of different statuses take place, and persons of lower status can be adopted into a higher status clan.

[00:45:29]  Allowing a character to change clans doesn’t sit well with James.  Prince Esélne essentially did this for Harsán at the end of Man of Gold (spoilers!).

[00:47:40]  Overall, it doesn’t matter where in the social hierarchy your characters are, but that the hierarchy exists and that players recognize it.  There’s something entertaining to be done regardless of where you fall.

Dragon Magazine was originally published by TSR, and titled The Dragon until 1980 with issue #39. The Dragon #11 was cover dated December 1977 and its above-referenced “Seal of the Imperium” article can be viewed or downloaded free-of-charge from the Tékumel Foundation here.

Legions of the Petal Throne was published by TSR in 1977.  It was the first set of rules for miniature battles set on Tékumel.

The Tekumel Journal was the first journal devoted to gaming on Tékumel.  Issue #2 is available for purchase from DriveThruRPG as a PDF.

Bob Alberti’s Article “How To Play Tékumel” is available here.

Flamesong, Professor Barker’s second novel remains out-of-print, but is easily acquired through online used booksellers.  The Tékumel Foundation plans to reissue it in print and electronic versions in the near future.

Lords of Tsámra, Professor Barker’s third novel, remains out-of-print.  It was originally published by Zottola Publishing in 2003, and currently, can only be obtained at significant cost from third-party resellers.  The Tékumel Foundation plans to reissue it in print and electronic versions in the future.