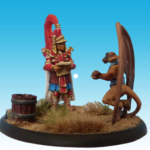 Welcome to The Hall of Blue Illumination, the podcast dedicated to the world of M.A.R. Barker’s Tékumel.  In this episode, our hosts cover several topics, including Tékumel activity at this year’s Gary Con, and an update on James’s players’ activities on the unnamed southern continent.  Then we return to the use of social distinctions in Tékumel games, before transitioning into a discussion of various approaches to roleplaying, including competing views on narrative tools such as “cut-scenes.”

[00:01:00]  Victor discusses his experiences at 2018’s Gary Con.  This year, he ran a major battle between the Mu’ugalavyáni and the Tsolyáni using Prof. Barker’s miniatures.  Two longtime Tékumel fans, Mark Siefert and Mark Eggert played the generals for either side.  The Mu’ugalavyáni had a decisive tactical victory, that would probably translate into a decisive strategic victory.  The premise of the battle was the Mu’ugalavyáni advance on Tumíssa through the Chákas.

[00:02:51]  Victor has attended every Gary Con except the first one.  Over time it’s gotten bigger, and though initially the crowd was heavily focused on “silver age” gaming, it’s become more diverse over the years.

[00:03:57]  Gary Con has become a crossroads of different kinds of games.  Victor played in an WWII: Operation White Box there.

[00:04:40]  Victor also ran a session of the Jakállan Underworld for a bunch of new players.  The players were trying to infiltrate the Temple of Hrü’ü to retrieve a stolen item.  Instead of sneaking in, the players charged in head first, and actually succeeded – though partially because of lucky dice rolls.

[00:06:30]  Victor also had a great time talking with Marc Miller one of the designers of Traveller.

[00:06:58]  Mark Siefert also ran several Tékumel games at Gary Con, and Victor reports that these tables were full.  Victor also dropped off copies of the Tékumel sourcebook and the new edition of EPT.

[00:07:40]  Product news: Tee shirts using artwork from the new Tékumel reprints are in the pipeline.

[00:08:14]  James gives us an update on his long running (3+ years!) EPT game.  Recall that his campaign began in the Tsolyáni city of Sokátis and after moving around a bit is now located in the extremely southwest corner of the Swords & Glory map, on the little-described southern continent.

[00:08:43]  James has always been frustrated by the fact that Tékumel’s continent’s don’t have names.

[00:09:18]  This section of Tékumel has virtually nothing canonically written about it.  James’s player characters have become involved in the government of this far-flung Tsolyáni colony.  This colony has interactions with other colonies located nearby, and the players are beginning to explore this unknown region.

[00:11:20]  James feels a certain amount of responsibility to treat it as a different, untouched place.  Even on the main continent you have the legacy of the various historical empires that influenced those regions, but on the southern continent you don’t have that.

[00:12:40]  James enjoys seeing the reaction of the Tsolyáni player characters to foreign customs.

[00:14:02]  The Tsolyáni concept of ditlána and the “layer cake” effect this has on underworlds affects Scott’s construction of them.  But how does this operate in James’s southern cultures, who don’t have the concept of ditlána?  James indicates that he’s still feeling it out, and as players force him to answer these questions, he develops answers.  Basically he’s emphasizing the strangeness of everything.  There are more natural environments like caves and caverns, and ancient things closer to the surface.

[00:16:25]  Because Tékumel has such a long and broad history, you can justify virtually anything.

[00:17:04]  “Tékumel is discoverable” – for players and referees.  There’s a tendency to want to “wrap your arms around all things.”  But you don’t have to know everything before you engage players, instead, you can figure it out as they do.

[00:18:34]  Finally, the question we’ve all needed an answer for – have James’s players discovered a cavern containing hundreds of mecha-Sró?

[00:19:07]  On to our main topic for this episode, a continuation of the discussion of social class.

[00:19:28]  Last time, the discussion ended on the point that as long as social class is an important feature of your game, it isn’t terribly important where your player characters are on that spectrum.

[00:20:00]  One way in which players and referees need to think about the player characters themselves, is that just because you need a patron, doesn’t mean that you’ll meet them immediately.  In the context of original D&D, it made sense to have the patron show up and get on with the adventure.  In Tékumel though, it’s more normal for an important person to send an agent first.

[00:21:24]  This level of social complexity lets the players build a network of contacts over several levels of society.

[00:22:28]  Like many aspects of Tékumel, it’s easy to get hung up on social hierarchy, but player characters have the opportunity to move more freely than other individuals of their class, precisely because they have a special utility to their patrons.

[00:25:35]  You can justify all kinds of deviations from the norms of Tékumel, despite what the rigid Tsolyáni would say.

[00:26:30]  So many times Prof. Barker would equivocate, rather than give absolute answers to questions.  The world is more complicated than that.  Victor gives an example of the massive amounts of money required to apply to a clan – but this is actually unrealistic.  In EPT, Prof. Barker makes a point that cash isn’t how this kind of business is normally done.  Instead, this kind of economy operates on a complex system of favors and services rendered which are given some kind of nominal value.

[00:28:30]  Rarely does the Imperium tell a clan that they must do something.  Instead, its phrased more in terms of social exchange, and the idea that one will satisfy one’s social debts.  The Tsolyáni would find the monetary directness of Americans to be louche and mercantile.

[00:30:30]  Big fish, small pond:  Returning to James’s southern campaign, he notes that lower-status clans can assume greater prestige in the circumscribed environment of a distant colony. Throughout the Empire, variations in the actual significance of different clans relative to their supposed status within the social hierarchy as a whole do occur.

[00:33:33]  Even in “real” Tékumel, society, and the status of the individual clans within it, evolves over time.  The descriptions in the Sourcebook give a taste of the ups and downs that various clans have experienced over their history.

[00:35:50]  How do you roleplay an interaction where you don’t know what your character knows?  Tékumel assumes that the player character has knowledge that the player doesn’t have.  A newer style system would simply ask you to make a skill roll.  But what if the referee, or the players just want to roleplay it?

[00:37:25]  Prof. Barker used the supporting cast to handle this, and Victor gives examples.

[00:38:45]  “Sometimes the game is played with subtitles” is one of the ways Victor deals with this.  Without resorting to an info. dump, he tries to give his players some context in his description, and maybe an indication of some considerations they might want to use.

[00:40:42]  Sometimes James gives advice about the way things would normally be done.  He uses his players’ interaction with a slave as an example.

[00:42:00]  But also, a character is an individual, and will make their own choices.  These might deviate from what a “normal” person would do.

[00:42:30]  One could set up a roleplaying encounter not unlike how one would set up a location-based encounter.  This could include some major talking points, along with possible pitfalls.  But you have to be careful that players understand what’s going on.

[00:44:10]  Players can also learn from overheard conversations between non-player characters.

[00:46:46]  Remember that when Princess Ma’ín invites you into her boudoir, that it’s an imperial command.  Best to have your affairs in order, because when she tires of you…

[00:47:20]  Victor explains why cut-scenes are bad.  Scott provides a counterpoint, and references Man of Gold.

[00:49:30]  The hosts discuss their different approaches with respect to the players knowing about other things going on in the world contemporaneously with their activities.

[00L54:28]  There’s a worthwhile discussion to be had about comparing the Tékumel of the novels to “game” Tékumel.

Victor’s old player character Mt’tk first appears in Prince of Skulls, Professor Barker’s fourth novel.  This book remains out-of-print.  It was originally published by Zottola Publishing in 2002, and currently, can only be obtained at significant cost from third-party resellers.  The Tékumel Foundation plans to reissue it in print and electronic versions in the future.

Swords & Wizardry is a retro-clone of original 1970s Dungeons & Dragons.  It incorporates various mechanics used in supplements published between 1974 and 1977.  You can find more information at Frog God Games.

WWII: Operation White Box is a Swords & Wizardry White Box compatible roleplaying game where players take on the role of special forces operatives in World War II.  It is published by Small Niche Games and available for purchase from DriveThruRPG/RPGNow.

Behind Enemy Lines is a roleplaying game first published by FASA in 1982.  It was the first roleplaying game set in the 1940s, and uses a rules system based in part on that of the original Traveller.  Back in 2010, James wrote a retrospective on the game for his blog.