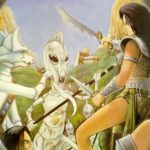 Welcome to The Hall of Blue Illumination, the podcast dedicated to the world of M.A.R. Barker’s Tékumel.  In this very special episode, the illustrious personalities who once comprised the Thursday Night Group have graciously reassembled for your edification.  Along with host Victor, these guests played in Prof. Barker’s Tékumel games for over twenty years.  Interesting anecdotes and bits of Tékumel lore abound as they discuss their old characters and the events in which they participated.  Strangely enough, this includes more than one explosion.

[00:01:41]  Steven Herne, the newest member of the Thursday night group – although “new” might be a little misleading since he joined twenty-plus years ago.

[00:02:12]  Giovanna Fregni, whose art has appeared in Tékumel products for over two decades.  She clears up how to pronounce her last name, and thus another Tékumel mystery is solved.

[00:02:45]  Bob Alberti, who begins with a mention of his janitor-priest of Ksárul.  Bob is co-author of Mitlanyál.

[00:05:55]  Originally, Tékumel gaming took place in Prof. Barker’s offices at the University of Minnesota.  That building is no longer standing.  From there it moved into the Professor’s basement sometime around 1974 or 1975.  There were more than two groups back then, and there were several groups and individuals who played on different nights during this time period.

[00:08:35]  This version of the Thursday Night Group stayed relatively consistent until 2004-2006.  Then it began to break up because Prof. Barker was starting to suffer the effects of neurodegenerative disease, which affected the quality of the game.  He remained mentally competent, however.

[00:10:44]  To shift the focus back to Prof. Barker at the height of his powers, no one could rival his ability to referee.  He kept track of thousands of moving parts.  Giovanna gives us an anecdote of a plot device that showed up 15 years after it was originally introduced.

[00:11:37]  But then, the players (being players) wandered around the Empire for a bit, and got distracted, and “walked into every mouse trap and stepped on every rake.”

[00:12:23]  “The mold can kill you!”  True Tsolyáni know well enough that no amount of káitars is worth entering the Underworld.

[00:14:00]  After a few short anecdotes, Victor gives a longer story about acquiring a ship of the ancients.  Spoiler: the group can’t recall precisely how many pilots they lost.

[00:15:58]  Another anecdote about the unintentional detonation of a nuclear warhead in Shényu.  If you don’t know what a button does, there’s a quick way to find out!

[00:17:00]  More important questions answered: Bob is as attractive as you think.

[00:17:55]  Our guests introduce their characters.  [GPD: And the hardest part of show notes – spelling Tèkumeláni names.]

[00:18:08]  Joe played several Shén, some of them connected to the “Heresy of the Orange Ball.”  He also played Arumél hiChánkolu for over ten years. Arumél was a warrior/ritual-priest.  His first character was Sa’án hiKáikumesh who was killed by a killing cloud spell in Mu’ugalavyá.

[00:20:28]  “A retirement home for nerds.”  The panel spends a whole minute trying to figure out where in Mu’ugalavyá Sa’án met his end.

[00:21:39]  The game was run on 3×5 index cards.  You knew the importance of your character by the amount of Urdu written on their card, but it wasn’t Urdu that could be read.  Giovanna’s best guess is that this was Tsolyáni written in Urdu letters.

[00:22:41]  Steven doesn’t remember all of his characters.  Achan from the Valley of Kashkomái.  He had two very strange children.  Steven also played the ship’s cook during one of the group’s travels over the pole.  This character’s greatest aspiration was realized thanks to a wish granted by the Lady Avanthé.

[00:26:13]  Lord Sanjésh had connections to Horodai, a demon.  This creature had the substance of Sárku and the essence of Thúmis.

[00:27:45]  Giovanna had several notable characters.  She originally got into the group to illustrate the Bestiary.  But on the first night, Prof. Barker threw her an index card with Sogái, a Ksárul priestess on it.  The Professor had amazing skills at throwing index cards.  The players initially encountered Sogái frozen in time by an Excellent Ruby Eye.  Giovanna also played a priestess of Vimúhla who inherited an iron mine in the Valley of Kashkomái that turned out to be infested with nexus points.

[00:32:20]  “Playing Phil.”  During a large military campaign, Keith created 250 player characters with names, families, and clan lineages, because he knew that Prof. Barker hated killing characters.  As soon as they had stats, they were people and he couldn’t kill them.

[00:33:45]  Giovanna also played several Avanthé priestess, but only so she could get information about demons. The aforementioned Sogái married Prince Rereshqála.

[00:37:42]  Why did Prof. Barker take Mt’tk away from Victor?  Not because Victor didn’t show up.  That was another character, and in his defense, his job kept him busy most nights.

[00:39:55]  Bob played Arján hiVaisonér, at least until Prof. Barker got annoyed at him for flying over a stockade wall.  In fact, Prof. Barker inflicted several indignities upon Arján.  He was a priest of Ksárul with an interest in demons and metaphysics.  He also liked to press buttons, break things, and blow stuff up.

[00:43:50]  The first time the Group saw Prof. Barker cry.  A scene at an auction operated by the interdimensional merchant house, Gíj and Sons.

[00:48:18]  The Thursday Night Group also had to go back in time because Arumél blew up an imperial prince.  Prof. Barker managed to keep all the events in his mind while the players crept around the edges and tried not to affect anything.  Oh yeah, and they also had to do it twelve times.  The mysterious Silver Suits show up.

[00:52:15]  Victor explains why it’s called the “Three Light Drive.”  Prince Dhich’uné was using one to send to other planes the cities who opposed him.

Zottola Publishing originally published the last three Tékumel novels, Lords of Tsámra, Prince of Skulls, and A Death of Kings, as well as Mitlanyál.

Mitlanyál is an in-depth exploration of the religious practices of the Tsolyáni in two volumes.  It was written by Bob Alberti and Prof. Barker and published in 2004 by Zottola Publishing.  It is currently out-of-print.

The Tékumel Bestiary was originally published in 1992 for the Gardásiyal rules set.  It was co-written by Prof. Barker and Victor Raymond.  Giovanna created the artwork.