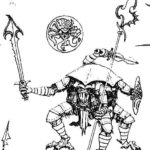 Welcome to The Hall of Blue Illumination, the podcast dedicated to the world of M.A.R. Barker’s Tékumel.  In this episode, Victor and James discuss their respective long-running Empire of the Petal Throne campaigns, and share several referee tips they learned along the way. Our hosts also introduce the first entries in two new segments; “Nonhumans of Tékumel” featuring the Ahoggyá, and “Nations of Tékumel” featuring the Empire of Salarvyá.

[00:00:50]  Today’s topic:  What have James and Victor learned from running a Tékumel campaign over an extended period of time?

[00:01:14]  Victor has found that accurate time-keeping is absolutely necessary.  There’s a lot happening in the wider world of Tékumel, and most referees will want to incorporate those events into their campaigns.  Also, if a referee is lucky enough to be running more than one group, these groups can find out about one another’s activities.

[00:02:20]  At first, Victor’s group was keeping track of time via irregular notes scribbled here and there.  Then they transitioned to using the calendar Victor put together.  This helped Victor pay better attention to the seasons of Tékumel, and how things like weather would affect the players’ characters.

[00:03:06]  Where is this Imperial Calendar available?  We’ll tell you!  If you’re listening to this podcast, go sign up for the Tékumel Foundation mailing list.  Your confirmation will include a link to download the calendar.

[00:03:50]  The calendar gives the months, days, seasons and holidays for the Tsolyáni Imperium.

[00:04:15] If you know the numbered day of the month on Tékumel, you also know which day of the week it is, because the weeks don’t vary.

[00:04:36]  It is 2355 AS in Victor’s campaign (GPD: So nine years before the death of Emperor Hirkáne hiTlakotáni).  As far as major world events, Victor picks and chooses what he brings in from the original game, and his players can’t assume that everything is going to happen like it did in Prof. Barker’s version.

[00:06:15]  Victor’s group started in July of 2017, and he thinks they’ve probably had about 60 sessions so far.  They usually play for about three hours on Wednesdays.

[00:07:00]  Victor has run many shorter Tékumel campaigns, and this is his longest running one.

[00:08:41] James makes sure he has a good sense of who the important non-player characters are.  For instance, when his campaign was still in the city of Sokátis, he determined the names of the governor, the heads of the temples, and the important clans beforehand.  Now that the players are on the southern continent, he does the same thing for significant persons and institutions there as well.

[00:10:36]  Victor seconds this, and adds that a referee should also prepare some of the lower status NPCs the player characters will be interacting with sporadically.

[00:11:40]  How does running Tékumel over time differ from running other settings over time?  James doesn’t find that a long-running Tékumel game is that different from another roleplaying setting.  This was surprising to him at first, because he initially went out of his way to emphasize its differences.

[00:13:41]  Victor agrees.  If you emphasize the strangeness of Tékumel too much, you do it at the expense of the familiar.  When everything is strange, nothing is strange.

[00:14:48]  Having truly fantastic locations can’t be an everyday occurrence.

[00:15:03]  It also doesn’t hurt to have some descriptors or phrases in place to describe what the characters are sensing.  This helps players develop a sense of place.

[00:17:30]  Having names for people can give the players a sense that these are real people.  For instance, if you just identify your NPC as “the merchant” the players will think he’s a nobody.

[00:18:27]  Right now, Victor is only using a list of personal names.  He hasn’t yet determined lineage names, in part because lineage names are tied up with specific clans.

[00:20:50]  Clans give characters a sense of their place in society, and what they’re responsible for.  James’s game started out with all of his players’ characters being from the same clan, but as they’ve added new player characters, this isn’t the case anymore.

[00:22:18]  Victor started with the classic “fresh off the boat” premise.  His players have accomplished enough that they’ve earned the notice of higher status patrons, and are starting to have to consider where they’re going to end up in the social hierarchy of Tsolyánu.

[00:24:29]  One of Victor’s player’s character is a priestess of Ksárul from a city-state in Háida Pakála which was taken over by a Tsolyáni clan centuries ago.  As a result, this clan thought of themselves as Tsolyáni, even though they’ve been in Háida Pakála for a long time.  She rolled high for her status, and this has set up a future conflict when she runs into the members of the main Tsolyáni clan, who are sure to see her as no more than a country bumpkin.

[00:26:10]  The backgrounds of Victor’s players is heterogeneous.  They’re running into an issue where all of his players have chosen different deities.  Why do they stay together with widely divergent backgrounds?  Well, they’ve adventured together for a while, and their patrons have generally recognized the benefits of it.

[00:28:08]  One’s faith doesn’t always determine who one associates with.  Even if you’re of a different faith, Prof. Barker emphasized that your characters would deal with one another with a degree of politeness and courtesy, even if some social distance.  Some clans are going to have members from several faiths, and faiths have members from several clans.  This is one place where players get overly specific and emphasize the opposed nature of their character’s backgrounds.

[00:29:39]  Rivalries between clans and faiths do not prohibit friendships between their members.  This this a frequent mistake for those who are new to Tékumel.  Even within faiths and clans, different members may have greater or lesser zeal for their precepts.

[00:31:20]  All of James’s players’ characters are worshipers of Deities of Change, but one of them, a priest of Sárku is married to a priestess of Belkhánu.

[00:32:32]  Nonhumans of Tékumel:  The first entry in a new segment on the podcast, our hosts discuss the eight-limbed Ahoggyá.

[00:33:14]  Has anyone ever described the Ahoggyá as charming before today?  Probably not.  But they do have a “disgusting appeal.”

[00:34:40]  What sort of government do they have?  Prof. Barker notes in the original EPT that he can’t include everything that would be important with the nonhuman races, and notes the P’chn.  This is a person who holds an incomprehensible set of ranks within Ahoggyá society.  The term means the “Dancer in the Circle.”  (EPT § 710, p. 30)

[00:35:37]  The Ahoggyá think very differently from humans, even more so when compared to the other races.  They seem gruff and self-centered, but they think of themselves as practical and not frivolous.

[00:37:01]  Instances of Ahoggyá in published Tékumel fiction are rare.  We briefly see “Old White-side” in Man of Gold (Ch. 23).  One also appeared in James’s campaign, briefly, as a slave.

[00:37:50]  The Ahoggyá strike James as one of the more “alien” aliens of Tékumel.  It’s hard to know what to do with them, since their mindset is so different from that of the humans.

[00:38:36]  Their language, comprised of hoots, whistles, and physical motions is unintelligible to humans.

[00:39:45]  There’s an oft-stated case that the Shén and the Ahoggyá have a great enmity, because the Ahoggyá ate Shén corpses at a battle long ago.   Prof. Barker said that while this was a wide-spread cultural belief, it wasn’t actually true.

[00:41:11]  Another interesting thing about the Ahoggyá is that they are very bad at magic.  This may be because of their mindset, or because of their eight-lobed brain.  Ónmu Tlé Hléktis is also magically barren, but the Ahoggyá are fine, because they’re in their element.  Prof. Barker also suggested that they might be lacking in certain vital nutrients which would allow them to reach their pre-Time of Darkness abilities.

[00:44:55]  Another new segement, Nations of Tékumel, beginning with Salarvyá, land of bearded men and strong wine.

[00:45:20]  James’s players have encountered Salarvyáni.  His players’ characters actually travelled there.  James likes the Salarvyáni, as an interesting counterpoint to the Tsolyáni, since Salarvyá has existed for a very long time, even though they have different interests and obsessions.

[00:47:02]  Unlike the cloistered Tsolyáni Emperor, the Salarvyáni allow their king to be seen by anyone.  They have seven feudal families who run their own fiefdoms; this contradicts Tsolyáni ideas of a centrally administered empire.

[00:47:42]  Much of the information on the other empires of Tékumel is not presented from an objective point-of-view.  Instead, its presented from a Tsolyáni perspective, using Tsolyáni terms that don’t completely reflect the reality of those cultures.

[00:48:24] James’s players started to act the most Tsolyáni once they found themselves among these other cultures.

[00:49:11]  James notes some things that he picked up about Salarvyá from the source material – the lack of unity, the importance of the noble houses over the king, who is in many ways just a figurehead.  The men wear great oiled beards, and their religious environment is different.  Their dominant goddess, Shiringgáyi has aspects of Avánthe and Dlamélish, but her portfolio extends beyond both.

[00:50:40]  “Pavár and his novelties.”  The Salarvyáni are treated as a joke by the Tsolyáni, but they’ve existed much longer.  They’re the original home of the Fisherman Kings, the first great imperium. So the cultures of the Five Empires derive somewhat from them.  They predate Pavár and his deities.

[00:52:03]  Victor notes that Salarvyá goes far into the east, and in an empire so vast, it isn’t surprising that the empire would have to rely on powerful feudal families rather than a government centralized under a faraway king.

[00:54:17]  Just like in Tsolyánu, a traveler encounters regional cultures.  We see a little of this in A Death of Kings, where you get a sense for regional variations.

[00:55:20]  Salarvyá is a big place.  Victor points out that if you look at the names of the cities along the empire, they seem to be oriented to barbarians from the north, who make incursions into the south.

Swords & Glory Vol. 1 was first published by Gamescience in 1983.  It is a detailed sourcebook for the world of Tékumel.  You can purchase it as a print-on-demand book, or as a PDF from DriveThruRPG.

A Death of Kings, Professor Barker’s fifth and last novel, remains out-of-print.  It was originally published by Zottola Publishing in 2003, and currently, can only be obtained at significant cost from third-party resellers.  The Tékumel Foundation plans to reissue it in print and electronic versions in the future.

Our hosts didn’t mention it, but Victor spoke with the G*M*S Magazine Podcast about Tékumel in an episode released on November 12, 2018.  You can listen to that here, or find it on your podcatcher of choice.