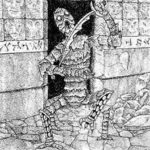 Welcome to The Hall of Blue Illumination, a podcast dedicated to the world of M.A.R. Barker’s Tékumel.  In this episode, our hosts continue their conversation with James Maliszewski regarding his Empire of the Petal Throne campaigns, and Victor discusses his recent experiences running Tékumel at two gaming conventions.

In addition to editing The Excellent Travelling Volume, James currently referees two on-going EPT campaigns via Google Hangouts, one set in Sokátis and the other in Mu’ugalavyá.

Victor recently refereed several Tékumel-based gaming sessions at Gamehole Con and U-Con. Each of these one-off sessions involved one of the three following scenarios: 1) a party of high-level characters exploring the Jakállan underworld; 2) a “fresh off the boat” campaign; and 3) characters of the same clan heading upriver by boat from Jakálla to Béy Sú.

[00:11:43]  James’s experience finding local Tékumel players in Toronto, and the reach of The Excellent Travelling Volume.

[00:19:48]  Disparities among James’s players’ knowledge of Tékumel, and how they have learned more through his games.

[00:23:14]  Scott segues the group into a discussion of Victor’s recent experiences refereeing Tékumel at gaming conventions.

[00:26:05]  Differences between the attendees (and therefore Victor’s player pool) at the two cons.

[00:29:56]  Victor explains how he sets up sessions for unfamiliar players, as well as his preparations for refereeing at cons.

[00:32:00]  Many of the aspects of gaming in Tékumel that make campaign-play enjoyable are simply not present in a one-off session at a con.

Con of the North

Choice of the Petal Throne – an interactive text-based novel set in the world of Tékumel, available on Steam, iOS, Android, and Google Play stores.