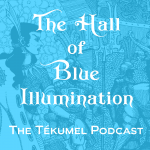 Welcome to The Hall of Blue Illumination, the podcast dedicated to the world of M.A.R. Barker’s Tékumel.  In this episode, our hosts discuss the enigmatic group of deities known as the Pariah Gods.  But before we get to that, Victor and James review the first twelve books listed in the magical tomes section of Empire of the Petal Throne.

[00:00:39]  Books.  Victor begins by discussing the Books section of EPT.  (EPT §1700, p.79).  As noted, there are “two to five copies” of each of the listed books on Tékumel.  James wonders about what this means, since writing on Tékumel is so much older than writing on Earth.  Victor speculates that the “two to five” specification is a legacy of the abstractions of original D&D, which was the primary example Prof. Barker was working with when he wrote EPT.

[00:05:01]  Does the process of creating one of these books make it proof against age?  Some are clearly quite ancient, while others are recent.  This implies that the method of creating them isn’t wholly lost.

[00:06:55]  Generally, if a character knows the language used in a book, then they automatically benefit (or suffer!) from its effects upon reading it.  Some books will actually disappear if they’re not read, and others are disguised.  Victor suggests this is an attempt to deal with reluctant players.

[00:09:43]  1.  Korúnkoi hiQiyór.  This is one of several books that grants experience levels to the right kind of character, while being ineffective or penalizing others.  It’s very similar to several of D&D’s magical tomes.  Victor notes that just because these incantations are attributed to Qiyór doesn’t necessarily mean that he actually wrote them.

[00:11:23]  2.  Korúnkoi hiSsánu hi Missúma.  There are a lot of peculiar differences here, including that the effect of this book is harmless to non-humans, even if they’re priests or magic users.

[00:12:54] 3.  Korúnkoi hiKhéshdu hiMrúrgayal.  Interesting that this book can be reused.  The effects are also limited, and the entry doesn’t explain how long it takes to read.

[00:15:48]  4. Korúnkoi hiSsyúsayal.  The fact that many of these books disappear indicates that they’re inherently magical, in addition to the effects they bestow.

[00:17:01]  5.  Timándàlikh hitùplanMitlándàlisayal.  James notes that Gardásiyal has additional notes on the books, often talking about their rarity.  For this book, it states that copies are abundant.

[00:19:12]  6.  Chégudàlikh hi Qón.  There’s no description of the physical dimensions of these books.  Victor notes that historically in the real world, there was significant variation in the physical formats of “books.”

[00:20:51]  7.  Chánisayal hiHayá.  We know that there are some “low” cartography maps in the Imperium, and these are probably an example.  Victor and James could probably talk about maps for another hour, but choose to defer that discussion to another time.

[00:23:20]  9.  Dímlalikh tlaSsúgayal.  Interestingly, Gardásiyal notes that copies are kept in the temples of Karakán in many cities of the Imperium, and that a similar book exists for followers of Vimúlha and Chiténg, but that the locations of those are uncertain.

[00:25:57]  11.  Li’ób Miffánsa Missrábchi’i MikKsárulkchi.  This book is Livyáni.  This is also a place where turns and melee rounds are shown to be distinct.  In-game, there are several strange things about this book.  For instance, why does it reference the Tsolyáni god Ksárul?

[00:28:40]  12.  Chnéshaq KhyChnéshayalu.  The difference in the classical Tsolyáni preposition “khy” from the modern Toslyáni “hi” is mentioned.  James notes that in Gardásiyal, it’s spelled “khüChnéshayalu.”  Also, according to Gardásiyal, there’s only one copy, and it’s in the Library of the Imperial Chancellery at Avanthár.  Where does a book go when it disappears?

[00:31:02]  The rest of the books are more mechanically complicated.  They’re also harder to pronounce.  But our hosts save those for another episode.

[00:32:02]  The Pariah Gods.  They’re somewhat mysterious.  We first find out about them in the first set of Imperial Dispatches in the April 1976 issue of the Strategic Review.  This is less than a year after EPT.  Victor reads the entry.

[00:36:42]  Victor discusses the use of the terms “good” and “evil” to refer to gods and priests.  Within the published EPT, these generally align to “stability” and “change” as used in later material.  But the pariah deities are in opposition to both of these factions, however you label them.

[00:41:32]  The Tékumel Journal #1 discusses gods in foreign places, but doesn’t say much about any gods besides Pavár’s pantheon.

[00:44:33]  The undying wizards aren’t really mentioned in EPT.  Súbadim appears in one paragraph.

[00:47:30]  The Pariah Gods are first described in depth in the Sourcebook.  (Sourcebook §1.610, p. 55)  There’s some discussion of the Goddess of the Pale Bone and the One Other, and their artifacts and temples.  There’s also a fascinating bit about the One Who Is.  Even this discussion is relatively limited.

[00:49:47]  Even though the Book of Ebon Bindings is devoted to demons of change, the Goddess of the Pale Bone is still worse.  James notes that the Sourcebook “opens up” the theology of Tékumel to non-Tsolyáni deities.

[00:51:24]  Victor mentions the rules for spellcasters in Swords & Glory’s “Player’s Handbook.”  It’s odd that Ksárul is retained in the pantheon while being at war with everyone else; while at the same time the One Other plays an instrumental role in imprisoning him.  They’re almost mirror images of each other.  James notes that there’s something different about Ksárul from all the other Tsolyáni deities.. He seems aloof from them.

[00:54:57]  Victor explains that the reason they became known as the Pariah Deities is because they didn’t want to “play ball” under the Concordant.  At least that’s how it’s presented in the histories, which are also presumably written with a pro-Pavár bent.

[00:55:52]  Victor gives an example from one of his sessions with Prof. Barker, where the player’s actions led to the victory of the One Other on an alternate Tékumel.  There was no mention of the other gods at all, and the player characters were treated as curiosities, but not poorly.

[00:57:32]  There are no descriptions of the Pariah Deities’ rituals.  The One Who Is remains mysterious.  Victor gives an example of a passing encounter with the One Who Is, and his prison.

[01:00:05]  James speculates that one of the main aspects of the Pariah Gods might be that they want everything – that they aren’t willing to share with the other gods.

[01:01:20]  The gods of Pavár’s pantheon are a neat package, even with their various aspects.  Perhaps those who are particularly scholarly theologians understand that there’s more complexity than the simple categories humans use to describe them.  This understanding might be part of the groundwork towards becoming an Undying Wizard.  Victor notes that based on his encounters with Súbadim, he believes him to have some kind of connection to Ksárul.

There were several supplements for the Gardásiyal ruleset in the Adventures on Tékumel line.  They were published between 1992 and 1994 by Theatre of the Mind Enterprises and are now out-of-print.

Dragon Magazine was originally published by TSR, and titled The Dragon until 1980 with issue #39.

The Dragon #4 is subtitled “Special Empire of the Petal Throne Issue” and cover-dated December 1976. It can be viewed or downloaded free-of-charge here.

The Dragon #11 was cover-dated December 1977 and its above-referenced “Seal of the Imperium” article can be viewed or downloaded free-of-charge from the Tékumel Foundation here.

Swords & Glory Vol. 1 (a.k.a. the “Source Book”) was first published by Gamescience in 1983.  It is a detailed sourcebook for the world of Tékumel.  You can purchase it as a print-on-demand book, or as a PDF from DriveThruRPG.

The Tekumel Journal was the first journal devoted to gaming on Tékumel.  Issue #1 and Issue #2 are available for purchase from DriveThruRPG as PDFs.

Swords & Glory Vol. 2 (a.k.a. the “Player’s Handbook”) was first published by Gamescience in 1984.  It provides an intricately-detailed ruleset for creating characters and gaming on Tékumel.  You can purchase it as a print-on-demand book, or as a PDF from DriveThruRPG.