Hall of Blue Illumination
Episode 5, "The Role of Language" 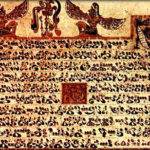 Welcome to The Hall of Blue Illumination, a podcast dedicated to the world of M.A.R. Barker’s Tékumel.  Chné màsunbrupílukh…er…in this episode, our hosts stoke their inner pedants with an exploration of language in the world of Tékumel.

[00:01:15]  Language shows up in everything Tékumel.  A frequent complaint is the difficulty of pronunciation, but it’s not as hard as it’s made out to be.

[00:03:47]  Tsolyáni as a language is very consistent.  While some of the sounds might be new to English speakers, the rules have few or no exceptions.

[00:04:13]  Stress is the most difficult aspect for James.  It’s not always in the place where a native English speaker would expect it.

[00:09:52] Gaming tip:  Use the languages to bring Tékumel alive.  For instance, use terms like “dná grain”, or “thésun gauze” to distinguish the setting’s culture.

[00:12:00]  Speaking Tsolyáni aloud, especially the longer words, channels the easy sensuality of the cultures of the Five Empires.

[00:13:59]  Digressions on dialect.  A handy example of dialectical distinctions between eastern and western Tsolyáni is the ü in Béy Sü.  In Western Tsolyáni, it is pronounced identical to the sound represented orthographically in German as ü (IPA y), while in the east it’s pronounced as the IPA vowel ɨ. (See The Tsolyáni Language §2.200, p. 3)

[00:15:22]  Over time, Professor Barker changed the notation of this sound in English spellings.  This is reflected in spellings of the name of the principal deity of the Tlokiriqáluyal; initially written “Hry’y,” later “Hrü’ü.”

[00:16:08]  The rules for pronouncing Tsolyáni are relatively simple.  Every letter is pronounced.  The acute accent indicates the stressed syllable.

[00:35:40]  The names of the epics mentioned in the source material are fantastic.

[00:39:56]  Attention to Tsolyáni language and culture can have practical benefits on one’s interactions in the real world.

[00:41:51]  Language shapes world-view.  An example is the effect of gendered pronouns on speakers’ associations with those nouns.

The Tsolyáni Language is available for purchase as a PDF at RPGNow.

Man of Gold is back in print.  You can purchase it through Amazon or CreateSpace.   It’s also available as an ebook for Kindle, Nook, or Kobo.

Not mentioned, but also relevant, The Tsolyáni Primer is available for purchase as a PDF at RPGNow.