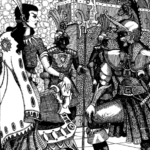 Welcome to The Hall of Blue Illumination, a podcast dedicated to the world of M.A.R. Barker’s Tékumel.  Scott has recently started an Empire of the Petal Throne game, so in this episode we discuss some of the more abstruse aspects of the 1975 rules set.

Our hosts close out the episode with pronunciations of the names of the Five Gods of Stability.

[00:01:20]  In Scott’s youth, he believed the 1975 rules set inferior to more modern rule systems.  But now he now realizes that EPT is a wonderful game as written.

[00:16:20]  Unless you’ve picked up the original playtest rules, you won’t know that Comeliness wasn’t an original EPT statistic.  This provides a window into Professor Barker’s approach to roleplaying.

[00:20:52]  In a “fresh off the boat” campaign, how do you reconcile the civilized Tsolyáni skills in § 420 with foreign player characters?

[00:29:10]  James reveals one of his house rules: occasionally, he transposes high Basic Talent scores to the Psychic Ability Chart (EPT § 414, p. 17) and where this chart gives bonuses to spells working, adds that to appropriate skill rolls.

[00:37:58]  Players frequently forget that EPT combat rounds are fought in pairs.  Therefore, if a defender is slain during the attacker’s round, he still gets a chance to strike a dying blow.  (EPT § 724)

[00:42:22]  Pronunciation guide for the names of the Tlomitlányal (the Five “Gods” of Stability).

The original manuscript of Empire of the Petal Throne is available as a PDF from RPGNow.

Swords & Glory Vol. 2 is available as a PDF or in print from RPGNow.

The original Chainmail rules were published by Gary Gygax and Jeff Perren in 1971.  They are available as a PDF from RPGNow.

The Advanced Dungeons and Dragons 1st Edition Dungeon Master’s Guide is available as a PDF from RPGNow.