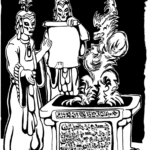 Welcome to The Hall of Blue Illumination, a podcast dedicated to the world of M.A.R. Barker’s Tékumel.  In this episode, we continue our discussion of the rules system of Empire of the Petal Throne.  Our hosts wrap things up with some notes on the Tlokiriqáluyal, the Five “Gods” of Change.

[00:01:20]  The rules of EPT are dense.  Professor Barker briefly mentions many rules, and it’s up to you to notice they’re there and parse them.

[00:03:55]  EPT has a fairly straightforward skill system, which is extraordinary for an RPG produced in 1975.

[00:09:14] EPT seems to presuppose that after you reach 10th level, a player character becomes involved in the campaign game, and begins influencing Tékumel on a scale beyond that of individual player encounters.

[00:15:58] D&D changed as it spread beyond the communities that originally produced it.  People started to game in isolated groups composed of their closest friends, and therefore these groups developed their own peculiar approaches to RPG gaming.

[00:19:49]  EPT “wants time to grow.”  Characters advance not only in terms of personal ability, but also in terms of social rank.  A player’s rank results exclusively from their social interaction with the rest of the world.

[00:34:20]  Artifacts of a simpler kind of gameplay in EPT do not imply that roleplaying wasn’t going on in ‘70s gaming.

[00:37:58]  Don’t think of EPT as D&D set on Tékumel. The D&D-esque system is merely a lens through which the world of Tékumel can be viewed. The world is so much more expansive than the rules set.

[00:47:30]  “How could anyone possibly think there’s anything wrong with the god of immortality?”

[00:48:51]  Pavár’s pantheon is the metric by which Scott measures all pantheons.

Tékumel Journal #2 is available as a PDF from RPGNow.

Madison Traditional Gaming is a gaming group in Madison, WI for people interested in traditional and contemporary roleplaying games, “usually with an ‘Old School’ flair.”

The Lawrence Schick article referenced by Victor is “Choir Practice at the First Church of Lawful Evil (Orthodox): The Ramifications of Alignment.”  It appeared in The Dragon #24 (April, 1979).