Hall of Blue Illumination
Episode 9, "Moving Off the Map" 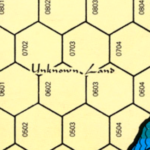 Welcome to The Hall of Blue Illumination, a podcast dedicated to the world of M.A.R. Barker’s Tékumel.  In this episode, our hosts discuss a variety of topics, including an upcoming EPT release, an interview Victor gave about Professor Barker’s invented languages, and how referees deal with players who move beyond the bounds of canonical source material.  Our hosts conclude with a discussion of the music of Tékumel.

[00:00:30]  News! Victor is finishing up the errata for EPT.  We plan to include it with the PDF of Empire of the Petal Throne, completing the set.

[00:01:20] An example of an interesting fact from the errata, Cure Wounds and Neutralize Poison do not mitigate radiation damage.

[00:03:45]  Victor is going to be running a Legions of the Petal Throne game at Gary Con this year, using Professor Barker’s miniatures.

[00:05:26] Britton Watkins is making a documentary about constructed languages, and recently interviewed Victor about the languages of Tékumel.

[00:12:09]  In preparation for these sessions, James comes up with lists of names for people and places.

[00:15:07] Referees, interact with your players.  Presented with only a part of the narrative, sometimes players will have better ideas than you do.

[00:18:19]  If you play Tékumel for any length of time, you will eventually exhaust all information on certain aspects and have to create your own.

[00:20:30]  There are some things that people have proposed in the past that do not really fit with Professor Barker’s canonical Tékumel.  That’s fine, and there’s always the possibility for something anachronistic or alien to make an appearance in the setting.

[00:22:30] One of Tékumel’s advantages as a setting is that much of its history is lost and mysterious.

[00:24:49]  Professor Barker was far more influenced by ancient cultures than by later ones.

[00:25:47]  The Professor encouraged players to imagine different things that might exist on Tékumel.  One example is the Nóm, a dark-skinned people who reside far to the east of Tsolyánu, past the Isles of Ill Winds.  Their culture is very different from those of the Five Empires.

[00:27:55]  The old Tékumel periodical The Imperial Courier, and the difficulties involved in republishing its articles.

[00:29:29]  Scott sort-of plugs his band with an anecdote about tracking down old copyrights holders.

Legions of the Petal Throne is out-of-print.  You find more information about it here.

The Imperial Courier was a Tékumel-focused periodical published by Tékumel Games from 1984 to 1985.  It is also out-of-print.

The Blue Room was a Tékumel-focused ftp site formerly hosted by Chris Davis, one that saw regular contributions from Professor Barker.  An archive of this material is available here.